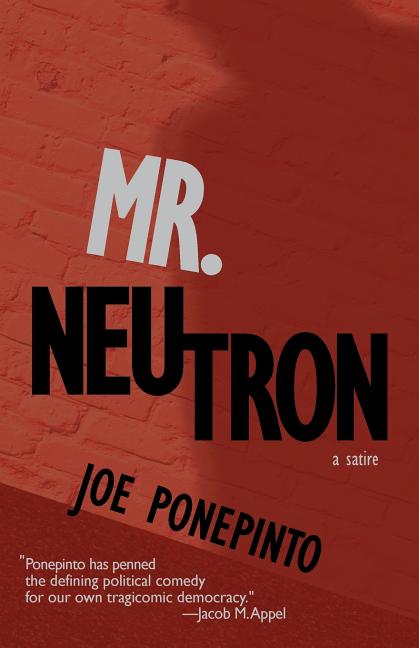 GET MR. NEUTRON AT AMAZON

In the smallish American city of Grand River, things are not so grand. The river is hopelessly polluted. City officials are in the pockets of oligarchs. And its best hope for meaningful change is a platitude-spouting eight-foot giant named Reason Wilder running for mayor.

Gray Davenport, a veteran political operative, isn’t faring much better than his hometown. His wife is about to leave him. He’s working for a mayoral candidate who has no chance to win and who can’t even pay for Gray’s services. When Gray notices that Reason may not be human, Gray embarks on a quest to uncover the truth about Reason’s mysterious origins, and the truth promises to change Grand River and Gray forever.

A satirical mashup of Frankenstein and Veep, Mr. Neutron is a hilarious genre-bender that speaks to the unpredictable nature of American politics today.

“Joe Ponepinto’s Mr. Neutron offers a hilarious and biting romp across the American political landscape through the eyes of beleaguered campaign operative Gray Davenport. Gray is a man accustomed to living a “slow-lane life” as an aide to a perennial office seeker, while conjuring up an imaginary alter ego, Monterey Jack, a tough hombre who bubbles with testosterone. Yet Gray’s existence picks up unexpected speed when his own wife signs on to manage the mayoral campaign of an eight-foot-tall opponent, Reason Wilder—a nemesis who seems hardly human. Soon several mysterious old men have hired Gray to investigate this monstrous neophyte…and what ensues is a mad escapade that perfectly captures the ongoing derangement of our current electoral order. Mr. Neutron is satire at its best: sharp, clever and unsettling. Ponepinto has penned the defining political comedy for our own tragicomic democracy.”
—Jacob M. Appel, author of Millard Salter’s Last Day

“Mr. Neutron is pure fun, satire at its best, skewering American government, politics, and society with delicious humor and insight. This is a book you’ll press on your friends, a book full of quotable gems and characters you won’t soon forget.”
—Kathy Anderson, author of Bull and Other Stories

A MacDowell Colony and Hawthornden Castle fellow, Leland Cheuk authored the story collection LETTERS FROM DINOSAURS (2016) and the novel THE MISADVENTURES OF SULLIVER PONG (2015), which was recently published in translation in China (2018). His newest novel NO GOOD VERY BAD ASIAN is forthcoming from C&R Press in 2019. Cheuk’s work has been covered in The Paris Review, VICE, Poets and Writers, Electric Literature, The Millions, The Rumpus, and Asian American Writers Workshop, and has appeared in publications such as Salon, Catapult, Joyland Magazine, among other outlets.