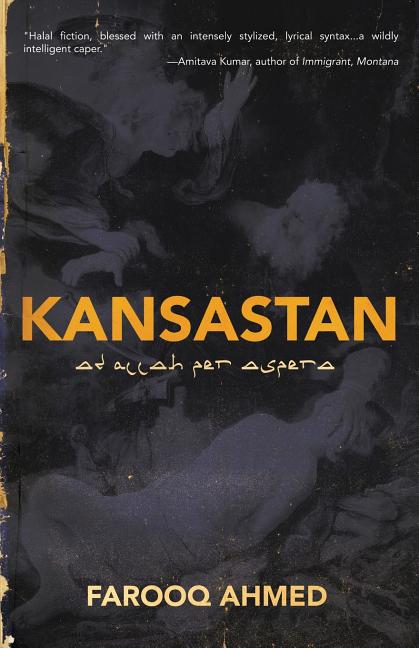 Inspired by the American Civil War, Kansastan takes place in a dystopic Kansas that is besieged by its neighboring state, Missouri. Close to the state line, an orphaned and disabled goatherd lives atop a minaret and is relegated to custodial work by the mosque’s imam while the threat of occupation looms. When his aunt and cousin arrive, the mosque’s congregants believe that the cousin, Faisal, is a young prophet. Faisal comes to also believe in his divinity, stoking the goatherd’s envy and hatred. When the cousins fall in love with the same woman, the goatherd hatches a plan to supplant Faisal in all ways possible—as suitor and the mosque’s savior.

Kansastan is a singular work, infused with Islamic folklore, Quranic lyricism, and Old Testament tales, as American as Cormac McCarthy, and most importantly—viciously funny.

“Holy shit, we are definitely not in Kansas anymore. And Farooq Ahmed is like no novelist this world has seen. Brutally funny and disruptive, Kansastan is a work of alternative history that finally seems more true, more real, and more painfully strange and sad, than the world it replaces.”
—Ben Marcus, author of Notes from the Fog

“Imagine Kansas as a state with a grand mosque and a powerful Islamic tradition. Imagine a border war against the ruffian Missourians. A questionable savior. A group of zealous, devout Muslim fighters led by a man named Brown. That’s the world of Farooq Ahmed’s outstanding novel Kansastan. From the first line, Ahmed’s extraordinary literary and political mind makes this book feel inevitable, moving, and American in every way. Prepare to be amazed.”
—Whitney Terrell, author of The Good Lieutenant

“In an America with a white supremacist president, where every day brings a previously unimaginable piece of news, I can think of no more fitting a novel than Kansastan, in which a young Muslim plots to take over his mosque and lead the parishioners into battle against Missouri. This is historical fiction/dystopian fantasy with a sense of humor as dry as a summer prairie wind.”
—Michael Noll, author of The Writer’s Field Guide to the Craft of Fiction

“Exhale as you say it: this is a book “for those who contemplate.” Bristling with mysterious blimps, six-legged steers, warlike Missourians, fields strewn with meat, and worm-lipped loves, Kansastan is part holy book, part slapstick fable, and wholly original. Prepare yourself for a world in which miracles beget murder, in which grandiose delusions bloom from decrepitude, in which cousin is pitted against cousin, Jayhawker against Bushwacker: prepare yourself for Kansastan. It is a joyful and deranged read.”
—Nina Shope, author of Hangings

“Farooq Ahmed’s epic yet intimate yarn about bloody border wars, false prophets, and the little mosque on the prairie is at once wholly believable and reminiscent of a new American myth. By slyly reimagining our nation’s darkest conflict, Ahmed has made everything I thought I knew about the U.S. of A. wildly, thrillingly new. When our Republic finally falls, a book will be plucked from the ashes, and its name will be Kansastan.
—Mike Harvkey, author of In the Course of Human Events 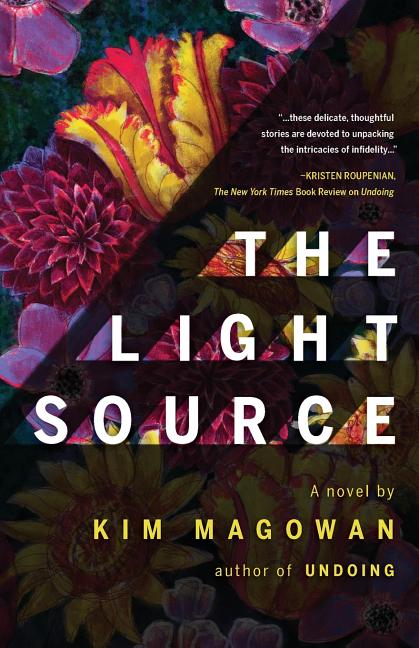 The relationship between Heather Katchadourian and Julie Howe is complicated. Over the past two decades, they’ve been just about everything to each other: boarding school roommates, best friends, lovers, rivals, even co-parents—both together and estranged. Will they find their way back to each other, or have they inflicted too much damage along the way? Reminiscent of the work of Meg Wolitzer, and narrated by Heather, Julie, their lifelong friends, partners, and children, The Light Source is a prismatic portrayal of what everlasting modern love truly looks like and reminds us that what’s meant-to-be becomes harder to define with age.

PRAISE FOR THE LIGHT SOURCE

“. . . these delicate, thoughtful stories are devoted to unpacking the intricacies of infidelity. . .”
—Kristen Roupenian, The New York Times Book Review on Undoing

“The Light Source so exquisitely illuminates the elusive natures of both love and truth. I was riveted by Magowan’s storytelling from the opening pages to the last, as each successive character both built their own narrative and also placed little charges of dynamite in the ones that had come before. An endlessly wise and devastatingly human book.”
—Robin Black, author of Life Drawing

“A deeply honest, emotional powerhouse of a debut by Kim Magowan, The Light Source is told through the individual voices of boarding school friends whose lives and relationships interweave and unravel by turns. At its core, two women share a fragile, complicated love marred by denial and betrayal. It is because Magowan’s people are so real, so flawed and funny and smart and hurting, that they compel us so. This novel brilliantly and movingly demonstrates the power of forgiveness and self-acceptance, and that which we so often forget: How by opening the one door we’ve always stubbornly refused to, we are at last rewarded with light.”
—Kathy Fish, author of Wild Life: Collected Works from 2003-2018

“In stunning prose that renders time’s passage with the fluidity of sand slipping between hourglass chambers, Magowan follows smoldering affairs over several decades, moving seamlessly between different characters’ lives to explore the conflicting demands made by love in its many forms—familial, sexual, sororal. Indulging in neither cynicism nor sentimentality, Magowan explores the sacrifices, even the price, demanded by relationships confronting social sanctions and past hurts; and the ways we flourish when we are willing to grow and change, and, above all else, to take risks.”
—Alice Hatcher, author of The Wonder That Was Ours

“With a cast of friends who have known each other intimately since prep school days, Kim Magowan creates a smart and intricate drama about love and friendship, loyalty and betrayal, and the knife edges that separate them. Mastering a range of authentic voices (male and female) and time periods (post graduate and midlife), Magowan artfully weaves together episodes that capture in large ways and small the decisions we make that will shape our lives and hearts—and our families.”
—Sylvia Brownrigg, author of Pages for Her

“Kim Magowan writes some of the most exquisite sentences out there and her metaphors flash at you like eyes in the dark. To me she is a literary equivalent of the renowned psychotherapist Esther Perel, for all the wisdom, candor, and wit she shines on human relationships. The story of Julie and Heather is told in a composition of seven voices. As in a chiaroscuro painting, each voice is a stab of light that creates stark contrasts with the voices around it. The Light Source is a wicked smart, sexy, and devastatingly tender portrait of love in all its muddy glory.”
—Michelle Ross, author of There’s So Much They Haven’t Told You